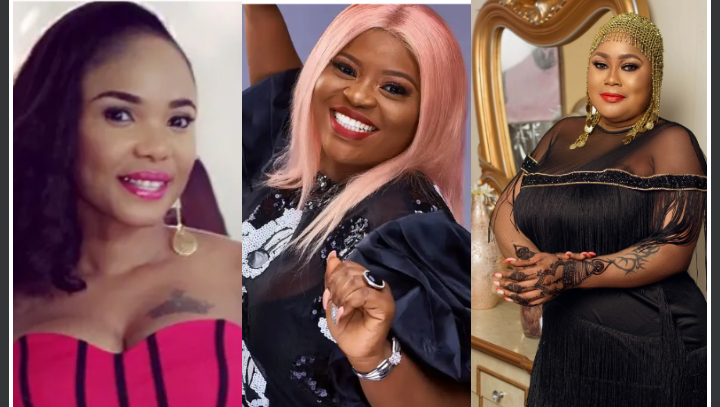 That craze for tattooing is now the order of the day in the entertainment world and some Yoruba movie stars are not left out in this trend. We have carefully unveiled the hottest 10 Yoruba actresses who have tattoos drawn in some intimate parts of their bodies, why they like flaunting it and where they are located.

The slim actress has displayed tattoo in different parts of her body. She has one on the breast, another one at the bottom top and others on parts of the body that cannot be seen by many. There is no doubt that she’s one of the talented actresses we have in the Yoruba movie industry.

This popular actress from Kogi State is one of the actresses that first had tattoo on their body. She had it on two arms, legs and also displayed one near her buttock. And she always flaunts it anywhere she goes; that means she’s proud to have tattoo all over her body.

One thing that is for sure is Sikirat Sindodo’s love for tattoo. The star actress who has romantically linked with several Fuji is no doubt one of the tattoo freaks in the movie industry. Her most obvious tattoo is on her left arm. According to a close source, the actress has got more tattoos in some unseen parts of her body.

Another Yoruba actress in this category is a single mother of two. The estranged wife of the talented actor Saidi Balogun, Fathia is one of the actresses that displayed tattoo on her body. In her own little way of fashion; she has tattoo on her body in order to look beautiful.

Tall and pretty Rukky Sanda was known to have a little tattoo on her ankle and arm since she came into movies until recently when she added a new one to her collection. It’s something similar to that of Tonto Dikeh, drawn all over her back but looks more like a floral design.

This curvy actress is one of the top actresses that have done their best in the Yoruba genre of Nollywood. She is not left out among the actresses that have tattoo on their body. She has her tattoo on her arm and who knows whether she has it at other parts of her body that cannot be seen by her fans.

Lizzy Anjorin is no doubt one of the actresses in the movie industry; otherwise known as Nollywood. The ‘lyawo Ojokan’ producer is not left out among the top actresses that are tattoo freaks, she has her tattoo displayed on her left arm and always loves to show the sign. She can also be classified as the first set of Yoruba actresses that had tattoo on their body.

Controversial actress Bisi Ibidapo Obe is a sexy lady who became popular and rose to stardom after starring in Bisi Omologba, where she made her debut appearance in the movie industry. The actress is never shy to show her tattoo. She is often known to talking about it to anybody who cares to know.

This well endowed actress is a talented actress and good role interpreter, despite the fact that she joined the industry not quite long. She’s among the top actresses that have tattoo on their body as a sign of fashion. She has her tattoo on her arm and other parts of her body.

Ayo Adesanya can simply be referred to as Queen Lateefah in Nollywood because of her gangster roles. ‘She is a talented actress that knows how to interpret her roles very well. She has her tattoo on the left hand. It’s also rumoured that the tattoo on her arm is the same thing as that of her former hubby.

Top 8 Most Beautiful Female Musicians In Nigeria In 2021