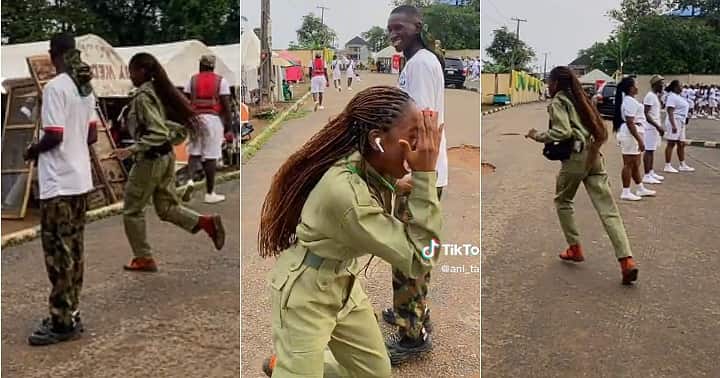 A video making the rounds online has shown the moment a bold lady danced for a soldier at the National Youth Service Corps (NYSC) orientation camp in Lagos state.

In the trending video, the young girl dressed in her khaki was spotted running towards the soldier.

She stood in front of him and began to shake her body while he stared.

At one point, the soldier smiled back at her and the lady who wasn’t expecting it, ran off while laughing hysterically.

“Lol I watched this video twice then realized it was u, where did u later camp, Abuja still or lag?”

“The soldier just reposted you on his story now. He’s my guy.”

“If you ever camped in Lagos, you can never relate many things people say abt camps tbh.”

“This soldier too fine o. He dey enter my eye sef.”

“Doberman Rottweiler”: Nigerian Lady Pranks Her Dogs & Falls, They Rush to Rescue Her in Lovely Video