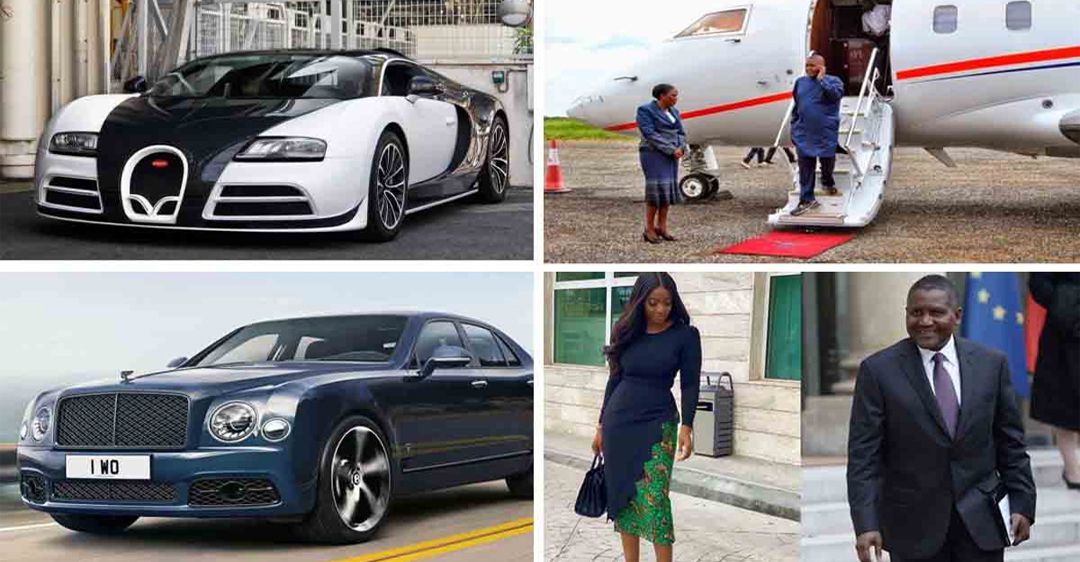 Aliko Dangote
The name Aliko Dangote is a household name when it comes to riches, wealth, billionaire and every other word related to the rich class. Aliko Dangote is not only the richest man in Nigeria, his riches also have placed him on the Forbes list of the world’s richest black men. The wealth he’s attained has become a great source of inspiration to entrepreneurs in Nigeria and across Africa, especially those who really want to start small but with big dreams.

Born in 1957, it’s no doubt that his family and upbringing played a major role in his achievements. Dangote grew up in an entrepreneurial household in Kano State, Nigeria. He was raised Muslim and lived an upper-class life. Dangote’s grandfather, Sanusi Dantata, was once named one of the wealthiest people living in Kano. He made his fortune selling commodities like oats and rice. Dantata became Dangote’s guardian in 1965 after the death of his father.

The journey to becoming the richest black man started for him at the age of 21. Aliko Dangote borrowed $3,000 from his uncle to import and sell agricultural commodities in Nigeria, his native country. His business venture quickly became a success, and as a result, he managed to repay the entire loan within three months of starting operations.

Aliko Dangote is the founder of Dangote Group, a Nigerian multinational industrial conglomerate. The company was founded in 1981 as a trading enterprise, importing sugar, cement, rice, fisheries, and other consumer goods for distribution in the Nigerian market. The Dangote group cuts across the needs of everyone as one will need at least one of their products.

Owning a private jet isn’t something anybody can do, it requires large amounts of money, but with the richest black man, this isn’t an issue as meeting up with his engagements is Paramount. Travelling with Nigeria’s commercial airlines, even in business class, can be problematic, with frequent delays and rerouting causing an inconvenience for everyone, including those for whom time is money. Africa’s richest man, Alhaji Aliko Dangote, sure knows how to live the big driven

It’s reported to cost $45 million, which translates to 16.3 billion naira. Aside from owning a private jet, Aliko Dangote’s luxury yacht is nothing but luxury at its best. The Yacht is believed to cost about $43 millIon (N13.2 billion).

The richest man of Africa always keeps his private life outside the media but it was reported that Dangote was married twice and also divorced twice, His Parent chose a wife for him at the early age of 20s, and Sometime later, he fell in love with a friend of his daughters Nafisat Yar’auda (daughter of Umaru Musa Yar’auda – our late president) but the girl said “no” to the marriage proposal. Later it was rumoured he secretly got married to ex Beauty Queen of Nigeria 2013 Sylvia Nduka

One would expect nothing less than expensive exotic cars for a man as rich as Aliko Dangote, and he isn’t letting us down.

Maybach is known for luxury and the black rich man has it among his car collections. Maybach 57S has a refined new look and enhanced technical parts. The car rides on 24-inch wheels with the same carbon-finish treatment and black powder wrapped in Pirelli tires sized 285/30R24. White brake callipers contrast the wheels nicely and an electronic level control drops the model closer to the ground. Lightweight carbon is the source material for the fibre hood, boot lid, and doors. A new hood and trunk lid, a rear diffuser, and a new rear spoiler. For good measure, the tuner also swapped out the stock engine cover for a carbon-fibre one. It is indeed a good fit for the world’s richest black man.

It is a known fact that one automobile company that shows class is the Mercedes Benz. Some of its amazing features include a turbocharged engine AMG V12 (6.0 l, 612 hp) and its great speed. This car is nothing short of all-around beauty.

On the list of Aliko Dangote’s cars is the sleek Bugatti Veyron. Moving at 431 kilometres per hour, it’s the perfect choice for a hot chase. Indeed, it’s one of the fastest cars allowed for use on public roads.

The Mulsanne range is the ultimate statement of Bentley’s innovation, craft skills and automotive artistry. The design language captures the essence of the marque. Inside and out, you’ll find artisanship of the highest order. The interior of the car has a special four-mode air suspension that creates a fluid sensation when driven across different surfaces.

Forbes has listed Aliko Dangote as the number one African richest man, Having an estimated net worth of $12.1 Billion this makes him the 85th wealthiest person in the world and the richest person in Africa.

It’s common for billionaires to acquire jets for personal use, and so does the richest man in Africa. Aliko Dangote bought a private aircraft named Bombardier’s Global Express XRS from Montreal Canada. The jet was delivered to Murtala Muhammad International airport in Lagos on the celebration of Aliko’s 53rd birthday. It’s reported to cost $45 million, which translates to 16.3 billion naira.

Africa’s richest man, Alhaji Aliko Dangote, sure knows how to live the big life. The President of Dangote Group owns a luxury yacht, which he bought for a mouth-watering $43 millIon (N13.2 billion)!

Aliko Dangote’s luxury yacht is nothing but luxury at its best as the pictures below show.

6 Nollywood Celebrities Whose Real Ages Will Surprise You