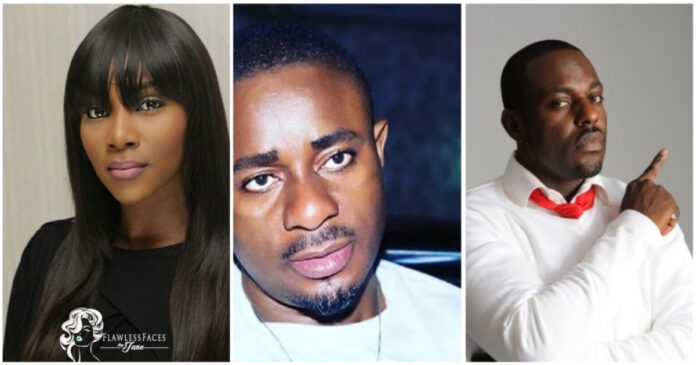 Reports had it that they usually demanded huge fees from producers because they were some of the choicest Nollywood stars. And as a result, they were banned from starring in Nollywood movies for a period of one year.

Following the temporary suspension, actresses like Stella Damasus, Omotola Jalade and Genevieve Nnaji tried a shot at music, but their music career wasn’t really a hit. And when the ban was lifted, they all returned back to acting.

Speaking in an interview years later, Ramsey Nouah said the ban had a huge impact in the Nigerian movie industry and paved way for a new era. In 2011, Omotola Jalade said the ban was a kind of a revolutionary stage in Nollywood, and as a result of that, actors are now well paid.

So here are 8 Nollywood actors that were banned from acting for demanding huge fees.

James Ikechukwu Esomugha popularly known as Jim Iyke is a famous Nollywood actor, producer, director, hip hop rapper, model and an entrepreneur. He was born on 25th September, 1976 in Libreville, Gabon. He is currently 41 years old. He is referred to as Nollywood Bad-boi because of his criminal role in movies. He is originally from Enugu Agidi town in Anambra State, Nigeria. He is the only boy in a family of eight children. He studied at the University of Jos, Plateau State & obtains a diploma in Banking and Finance and then a B.Sc. in Philosophy. Jim Iyke began his acting career in 1996 and has starred in over 150 films. He is one of the highest paid actors in Nollywood.

Genevieve Nnaji is a Nollywood actress, singer, model and an entrepreneur. She was born on 3rd May 1979 in Mbaise, Imo State, Nigeria and grew up in Lagos, Nigeria. She is currently 41 years old. She is originally from Mbaise, Imo State, Nigeria. She is the fourth child in a family of eight. She was brought up in a middle class environment. Her father worked as an engineer while her mother worked as a teacher in Lagos State. She attended Methodist Girls College Yaba, before heading onto the University of Lagos to study Theatre Arts. She joined Nollywood in 1997 and has starred in over 200 movies.

Richard Mofe Damijo popularly known as RMD is a famous Nollywood actor, director, producer, investor, politician and a philanthropist. He was born on 6th July 1961 in Warri, Delta State in the south southern part of Nigeria. He is currently 56 years old. After completing his primary school education, Richard Mofe Damijo (RMD) proceeded to Midwest College in Warri and later completed his secondary school education in Anglican Grammar School in Warri, Delta State, Nigeria. After completing his secondary school education, Richard Mofe Damijo (RMD) proceeded to University of Benin in Edo State, Nigeria and graduated with a Bachelor’s Degree in Theatre Arts. After which he went further to University of Lagos and obtained a Master’s Degree in Law. RMD joined Nollywood in 1995 and has starred over 250 movies.

Omotola Jalade Ekeinde is a Nollywood actress, singer, model, entrepreneur and a philanthropist. She was born on 7th February, 1978 in Lagos, Nigeria. She is originally from Ondo State, Nigeria but grew up in Lagos, Nigeria. She is currently 42 years old. She attended Oxford Children School Lagos, Chrisland Primary School Lagos and Command Secondary School Kaduna. After which she attended Obafemi Awolowo University Ile-Ife and Yaba College of Technology Lagos where had a diploma and degree in Estate Management. She joined Nollywood in 1995 and has starred in over 230 movies.

Nkem Owoh popularly known as Osuofia is a Nollywood comic actor, producer, comedian and a television personality. He was born on 17th October 1960 in Amagu Village, Udi Town, Enugu State, Nigeria. He is currently 59 years old. After completing his primary and secondary education, he headed to the University of Ilorin to study Electrical Engineering. He later completed his studies at the Institute of Management Technolgy (IMT), Enugu where he studied Electrical Engineering. During his university studies, Nkem Owoh joined Nollywood in 1990 began acting in various televisions drama and film productions companies. He has acted in over 200 movies.

Stella Damasus is a famous Nollywood actress, producer, singer, television personality and a model. She was born on 24th April 1978 in Benin City, Edo State in the south southern part of Nigeria. She is currently 42 years old. Stella Damasus has four sisters. She grew up in Benin City, Edo State, Nigeria where she completed her basic education and obtained her First School Leaving Certificate. After completing her primary and secondary school education, Stella Damasus proceeded to University of Lagos and graduated with a Bachelor’s Degree in Theatre Arts. She joined Nollywood in 1992 and has starred in over 200 movies. Ramsey Nouah is a famous Nollywood actor, director, model and a television personality. He was born on 19th December 1970 in Lagos, Nigeria. He is currently 50 years old. His father is from Israel while his mother is from Owo, a small town in Ondo State in the South Western part of Nigeria. He grew up in Surulere, Lagos, Nigeria where he attended Atara Primary School and Community Grammar School, Lagos. After completing his basic education, Ramsey Nouah obtained a diploma in Theatre Arts at the University of Lagos. Ramey Nouah joined Nollywood in 1993 and has starred in over 250 movies. He is often called “Lover-Boi” for his roles in romantic film.

‘My Encounter, Why I Stop Womanising’ – Ghanaian Star, Majid Michel Finally Opens Up